Difference between revisions of "Coupled transient tutorial with MSCS"

This tutorial describes how to use Serpent 2.1.29 to solve a simple reactivity insertion transient for a 3x3 rod unit cell with a central AIC control rod. We will solve the coupled neutronics-fuel temperature problem for an accidental fast removal and return of the control rod. We will not solve heat conduction in the fuel, but will use an adiabatic approximation instead: all heat is modelled as remaining at the place of deposition.

The XY and XZ cuts of the geometry we want to simulate are shown below: 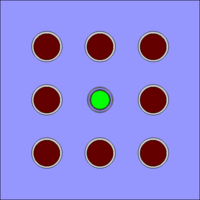 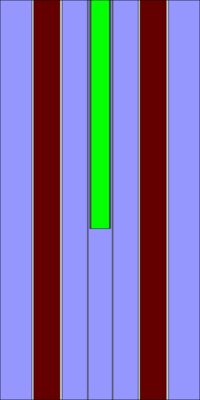 The details of the transient we want to simulate follow: In the beginning of the transient, the system (made critical by soluble boron) is operating at a power level of 1.0 W with the delayed neutron precursors at their stable concentrations. The control rod is removed from the system with an instantaneous upward velocity of 100 000 cm/s, which is maintained until the control rod is completely removed from the geometry. After this, the control rod is inserted back with 5% of the removal speed until the initial position is reached again.

Let's start with the following input (you'll have to link to your own acefile):

Running the simulation will produce the geometry plots already shown above and also tell us something about the estimated k-eff of the system:

The system seems to be quite critical, but we can simulate more neutrons to be more certain. With 500 active cycles we'll get

which is good enough for our toy transient. If you are trying to match experiments or otherwise trying to obtain a best estimate, you should probably generate the initial source with a system that is as close to critical as possible (1.00000 +- a few pcm if possible). That is for transients starting from a critical state.

The generation of the dynamic source is described on the Transient simulations page. We'll want to start our transient from a neutron and precursor distribution that corresponds to a "snapshot" of our system that has operated at constant power for a long time.

Saving the source distributions with Serpent is straightforward. We will just add

into our input file.

The contents of each file are described here: Transient_simulations#Output

If we would want to generate a proper source for real calculations we might simulate more neutron histories in the source generation calculation so that the produced source files would contain a better statistic estimate for the neutron and precursor distributions. Now we will simply contend ourselves with the small number of neutrons and precursors we were able to save.