The base input for the problem is given above. The input describes a 300 cm long fuel rod in infinite lattice geometry. Axially the fuel rod is reflected from top and bottom with 10 cm water layers after which a black boundary condition is applied. The radial geometry is shown here: 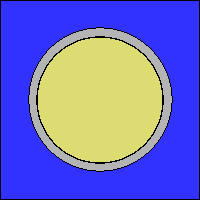 Let's say that we want to calculate the axial power distribution and flux distribution using 100 axial bins over the active fuel length at burnups between 0 MWd/kgU and 20 Mwd/kgU. In order to capture the axial burnup distribution we will divide the fuel material axially into a rather small number of division zones (10) using the div card.

Yz-meshplot of the fission heat deposition and thermal flux as a function of burnup (explicit Euler's scheme). The instability of the burnup algorithm is clearly visible.

Where "ce" refers to "constant extrapolation".

The input used for this calculation is given below:

Running the calculation will produce one yz-meshplot for each of the burnup steps (animation shown on right) and already based on these meshplots it is easy to see that the solution is neither symmetric or stable. 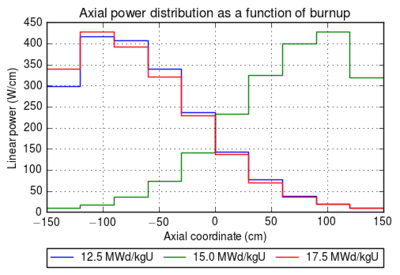 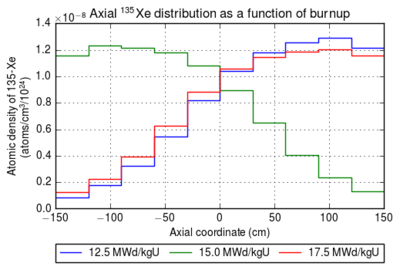 These plots show that the solution really is quite unstable. Even a small asymmetry in the fission power produces an asymmetry in the 135Xe distribution, which in turn affects the power distribution. Setting the equilibrium xenon calculation on (set xenon 1) typically offers some relief, but similar asymmetries in other nuclide densities can destabilize the solution.