Difference between revisions of "Universe-based geometry type in Serpent"

The description below is quite technical, since it was adopted from lecture material on the Monte Carlo method. From here on it is assumed that particle tracking takes place in a three-dimensional Cartesian coordinate system. In vector notation, the position and direction of motion are defined by two vectors:

forms with the positive x-, y- and z-axis, respectively. 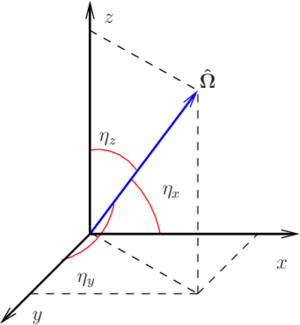 Monte Carlo transport codes are most typically based on the constructive solid geometry (CSG) type, in which the geometry is composed of homogeneous material cells, defined using combinations of elementary and derived surface types.

The most elemental building block is the surface, described using algebraic equations, typically of the quadratic type. The action that puts an arbitrary position